Pilgrimages to Santiago de Compostela began with the discovery, at the beginning of the 9th century, of the tomb of Apostle James in the Forest of Libredón, now Santiago de Compostela. With the recognition by Afonso II, O Castro (The Chaste), who pilgrimage centres in Christendom. Each way chosen by a pilgrim, from the starting point to the Apostle's tomb, is a Way of Saint James however, the ways that are defined as such are the main roads of that time, large part legacies of the Roman presence in the peninsula and which, for practical and safety reasons, were chosen by most pilgrims. The Portuguese Way, and its different itineraries, is one of the ways that ends directly at the Compostela cathedral.

In general, in Portuguese territory, the elements that identify the Ways of St. James are the parishes dedicated to Saint James, their settlement along the pilgrimage routes and the chapels built in his honour, as well as bridges, fountains, stone crosses, statues of the Apostle, devotional confraternities. Monasteries associated with the pilgrimage of St. James, heraldry, place names, feasts and legends.

The Jacobean or Xacobeo (in Galician) is a very important feast in Spain, taking place whenever July 25th (Saint James' Day) falls on a Sunday. As it depends on a very specific calendar and because it is the feast of the patron saint of Spain, it is an occasion that is long awaited by everyone, and can take between 5 and 6 years to repeat itself.

In the year 1126, Pope Callixtus II granted the forgiveness of all sins to any pilgrim who completed the way of Saint James, in a year in which the Jacobean occurred. As it is a tradition that continues to this day, these special years lead even more pilgrims to travel one of the many ways to Santiago de Compostela.

Due to the pandemic situation experienced a little all over the world during 2021, the Xunta decided to extend the festivities. Pope Francis himself has authorised the Holy Year 2021 to be held over two years. Thus, for the first time in history, the Jacobean will be held in 2021 and 2022.

If you are thinking of doing the Way of Saint James or have always dreamed of doing it but haven't had the opportunity yet, we recommend that you do it in 2022. Depart from Porto towards Santiago de Compostela and enter the Cathedral in the Jacobean year, thus concluding your Way in a different and special way! 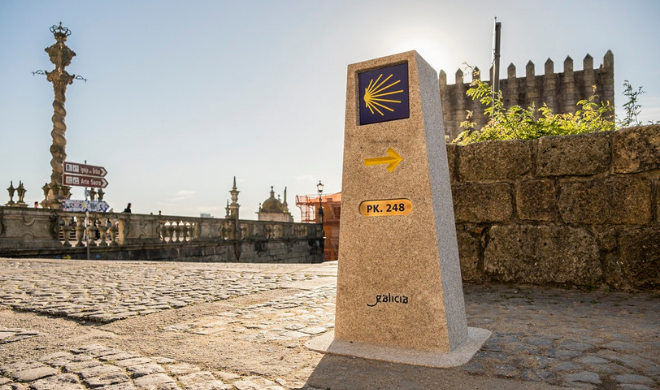 The Coastal Way is characterised by the mixture of a sea and overland component. The use of this pilgrim way is essentially related to the fact that journeys by sea were quicker and less exposed to the perils of overland routes and, as a result, they were popular. These sea routes followed the commercial cabotage routes along the Portuguese Atlantic coast, which many pilgrims, a lot of which foreigners, used to travel from Lisbon to the ports of Aveiro, Porto and Viana do Castelo, from where they continued by land to Santiago de Compostela.

The form of the so-called Coastal Way, in similarity to most of the Jacobean routes, is structured around the point of departure of the pilgrim and the personal choice of route to follow. Of course, pilgrims set off for Compostela from Portugal’s Atlantic coast. On the North, the original route really ran inland through the current municipality of Póvoa, and the village of Amorim, where a parish dedicated to St. James still exists. From there, the route followed on to Barca do Lago (near Esposende) heading to Viana do Castelo. 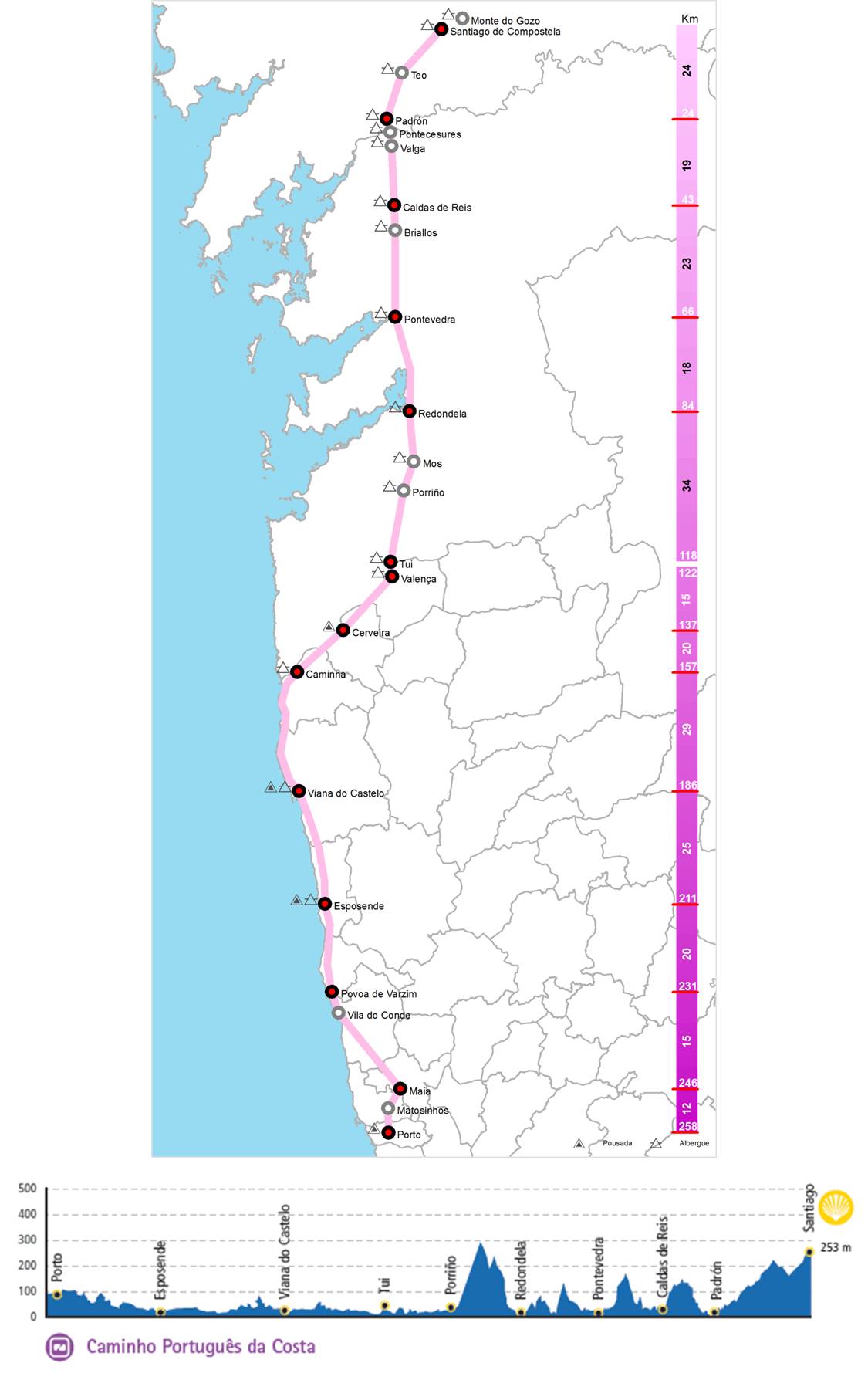 Alternative route through A Guarda - 253 km

This was a less used route travelled by some pilgrims who used the commercial sea routes into Portugal. Once on Portuguese soil, they followed the coastal routes to Santiago de Compostela. Along this coastal route can still be found some place names, pilgrim shelters and Jacobean iconography that confirm the use of a coastal trail to Santiago de Compostela. The route from Porto ran through Vila do Conde and Esposende. Pilgrims could also embark at Viana do Castelo and Caminha and travel to the Galician border by crossing the River Minho in the direction of A Guarda, from there continuing on to O Rosal, Oia, Baiona, Nigrán and Vigo. Then they headed towards Redondela, joining the Central or Main Portuguese Way.

The Caminho Português da Costa begins in (13) Praça da Ribeira (pre-14th century), the point at which travellers crossing the Douro River would arrive.

From here, go up Rua dos Mercadores, Rua da Bainharia, Rua de Sant’Ana, and Rua de S. Sebastião to reach Morro da Sé. With the Cathedral behind you, go down the Cathedral steps, alongside the (15) Casa da Câmara (old City Hall - 14th-15th centuries, rebuilt in 2000 by the architect Fernando Távora) towards Rua Escura, where the Chapel of N.ª Sr.ª do Ferro used to stand (demolished in 1928).

Crossing Rua de Egas Moniz and Rua da Constituição brings you to the square Praça do Exército Libertador, with its (10) Cross of Senhor do Padrão. Follow Rua do Carvalhido and Rua do Monte dos Burgos as far as the ring road- Estrada da Circunvalação. The route carries on along the old Porto/Vila do Conde road, Rua do Seixo, before arriving at the Cross of Padrão da Légua.

Watch here the short promotional, themed video, specially dedicated to the Ways of Saint James that cross the city.

Due to the Covid-19 outbreak, we advise you to previously contact each one of the hostels.

See HERE alternatives for overnight stay in the municipality.

At the Youth Hostels (Albergues), when booking, you should inform that you are a pilgrim. It is not necessary to have the Youth Hostel Card, but only to present your Pilgrim Passport. If you choose to stay at an accommodation unit you should identify yourself as a pilgrim ans present the credential as in some cases there might be a reduction on the price.

Booking accommodation and support along the way:

The credential can be acquired in Porto's ﻿﻿Cathedral﻿﻿, Terreiro da Sé.